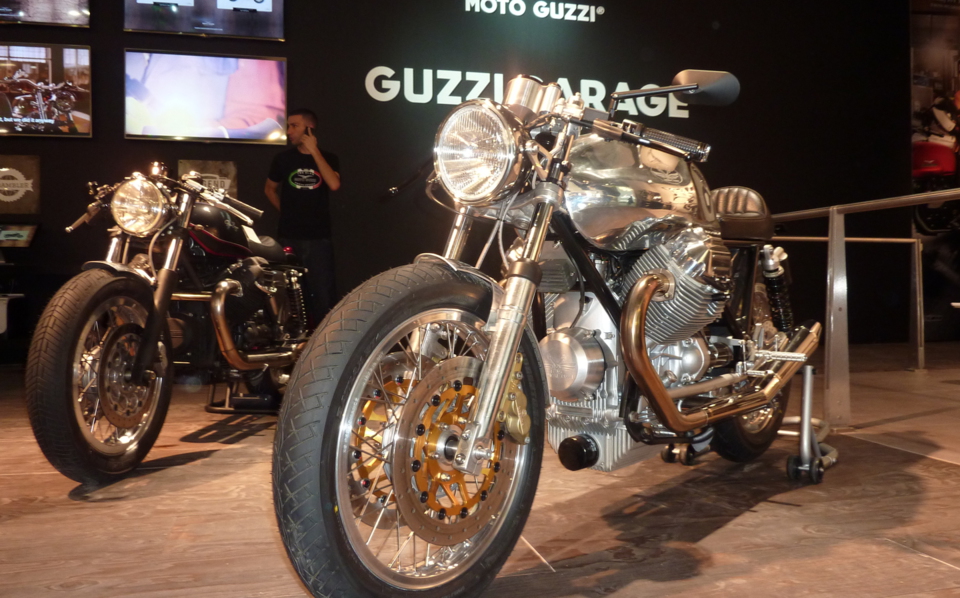 If you are at the show do make sure you visit the stand for a look at the bikes and a natter!

Detals below to be confirmed when information becomes available

Once again the Scottish Branch have a stand in the Classic Hall at the Scottish Motorcycle Show at Ingliston and we need to have a good selection of members bikes to create an interesting display to promote the club. The show is on 7th - 8th March, 9am-5pm. Entrants must be able to take the bike to Ingliston between 10am and 9pm on Friday 7th and leave it on display till 5pm Sunday 10th.  There is not a lot involved - you don't have to be there for the duration of the show but you do get 2 free tickets per bike entered and Car park passes are available. So if you wish to display your bike and see the show for free please respond on the contact page and we will pass on the details to Dave to return to the show organisers - all we need at this stage is the model, year and colour of your bike and remember it doesn't need to be immaculate. An early response  would be appreciated as we need to get the information to the organisers by 16 February.

Remember if you are at the show do make sure you visit the stand for a look at the bikes and enjoy a coffee and a natter!

Scottish Bike Show on 9 – 10 March at the Highland Showground at Ingliston. The organisers of the Classic element of the show had changed and the information during the run up to the show had been sparse and disjointed so we were somewhat concerned as to what we would find when we arrived to set up.

The first problem was trying to get into the approach road to the hall with the car and trailer and we were told to go and park up somewhere and come back in half an hour. As you can imagine that did not go down to well with me being an impatient old B! However after a little discussion about the possible alternative access into the hall, the man on the gate saw sense and allowed us to go forward to the entrance doors where we had to unload the car and carry everything into the hall for the set up. This was straightforward as there were plenty of our very able members there to help out. The bike was taken off the trailer into the hall and the trailer was parked up outside the hall and handy for the exit on Sunday.

The space allocated for the stand was a bit tight and our efforts to expand this as we have done in previous years was thwarted by the organisers.

We had an excellent display of motorcycles on the stand including a California 1400, 1200 Sport, Daytona RS, 400GTS, Stelvio, Zigolo 98cc, and the award winning 1953 Motoleggera of Robert Craig’s

A big thanks must go to John and Chris for making the effort to make such a long journey to have their fantastic Daytona RS on display on our stand which generated a great deal of interest.

The show was very busy at times over the weekend and we had lots of club members visit the stand and quite a few potential new members. All in all a successful event.

The break down and packing everything away into the car was delayed somewhat due to only one exit route being available – hopefully this will be sorted next year as there are other exits that could be used to speed things up.

So were now on to April and the rescheduled Motorcycle Show, the original March date having been cancelled due to "The Beast from the East" and now the heavy snow on the Wednesday before had us wondering if we would ever get there but fortunately it did not last and pretty soon disappeared. We travelled through to the show on Friday afternoon with all seven members that had committed to the earlier date still being able to bring their bikes along.

The stand was all set up and looked OK given that we were kind of boxed in with the Laverda Club on one side and the Blood Bikes on the other. Usually we have a little bit more breathing space but you just have to work your way around it when building the stand up from various bits and pieces held together with lots of gaffer tape and tie wraps!

It proved to be a successful show for the Branch and the Club with Dougie Oliver winning a first prize with his immaculate 99 California and seven new members signed up over the weekend with a lot more membership application forms given out to prospective members. The Club’s roll up banners detailing the benefits of membership definitely helped to generate interest and enquiries.

The show attendance seemed to be pretty good however the rescheduling had caused some casualties in the main hall with a number of marques conspicuous by their absence.

On Sunday evening the task of dismantling the stand and removing the bikes was undertaken with the usual haste and everybody headed home – a lot of hard work for those involved but well worthwhile.

On Friday 9 March we headed through to Ingliston to set up the club stand for the Scottish Motorcycle Show.

On arrival we found that due to roadworks in the showgrounds we had to use a different entrance to access the Hall which meant that everyone was trying to access the one entrance and it was well choked up. Eventually managed to persuade the man on the gate to let us take the car and trailer all the way round the outside of the halls to access the hall entrance we would normally come in at. We managed to get the bikes in and the stand pretty well set up before heading home however there was no sign of the Falcone when we left although it did arrive very late on in the evening.

The bikes we had on display were:-

This gave us a very good representation of the Guzzi product, the star this year being the Falcone, an absolutely mint example which attracted a lot of attention, which I am sure will feature in a future edition of Classic Bike magazine.

The show and the stand were very busy over the weekend and plenty of chat was had with Guzzi enthusiasts and some potential new members.

A lot of hard work goes into setting up and taking down the stand and getting the bikes to the show – so a big thanks to all those involved for making it a successful representation of  the club at a major event.

The afternoon of the 11 March saw us heading to Ingliston to get prepared for The Scottish Motorcycle Show held over the Saturday and Sunday.

We arrived at the show hall earlier than usual so we had plenty of time to get the stand organised.

It is always difficult to do much preparation as you don’t really know what the size and shape of the area you have been allocated will be until you arrive at the hall ,so it is a case of turning up with plenty of stuff and a lot of imagination! Hopefully that doesn’t show too much in the finished result!

The space we had been allocated was not particularly big and was only large enough to display the 10 bikes we were expecting to arrive. However there was a space at the end of our allotted area that appeared to be vacant so we quickly commandeered it to accommodate the new Scottish Branch gazebo, which, with a couple of tables, some banners, posters, flags and of course, the kettle, became our wee home for the weekend where we could extend our hospitality to fellow members and prospective members.

The 10 bikes on display were, a Bellagio,  Centauro, V7, California (which won a prize), California 1400,  1200 Sport, 400 GTS, Falcone, V50 Monza, and a newly restored 850T3 with some before and after pictures to tell the story and show the hard graft that went into it. All in all, a great display.

The show was busy throughout the weekend and plenty of club membership application forms were distributed.

Once again the event organisation was excellent, the event staff were very helpful in ensuring we got the bikes into the hall without any hassle..

We had nine bikes in total  which were :-

A great selection of bikes which attracted a lot of interest over the weekend – the 78 Lemans was outstanding.

So with bikes all laid out, the gazebo erected, flags and banners appropriately draped and a couple of tables commandeered from elsewhere in the hall we were more or less ready to go. So it was off home to return the following morning.

On entering the hall on Saturday morning I could here live music coming from somewhere and as I approached the club stand the music got louder and there was Graeme playing away entertaining every one, so in addition to the bike s we had our very own star turn as an added attraction. Thanks Graeme, it really was superb.

The stand was busy over the  whole weekend with a lot of familiar faces coming on to the stand to enjoy the chat and the hospitality,  Having an electrical socket on the stand allows us to have a kettle to supply tea and coffee to our visitors.

A lot of membership forms were handed out so hopefully we will have some new faces for next year. We did also manage to enroll a few new members over the weekend and a special thanks goes to Crawford from The Grampian Transport Museum who not only joined the club but also gave a generous donation to the branch. The website for the museum is www.gtm.org.uk  take a look and I am sure you will make the effort to visit if you are in the Aberdeen area.. All in all a great show, the classic / club hall is always the best area of the show.in my opinion.

Want to become a member?

For an online membership application form go to:

The 2021 Scottish Rally will be held as a Virtual Event on Zoom again this year due to the Covid 19 restrictions. Please check the Events Page for information on how to join in.

CHECK EVENTS PAGE FOR ALL 2021 ACTIVITIES